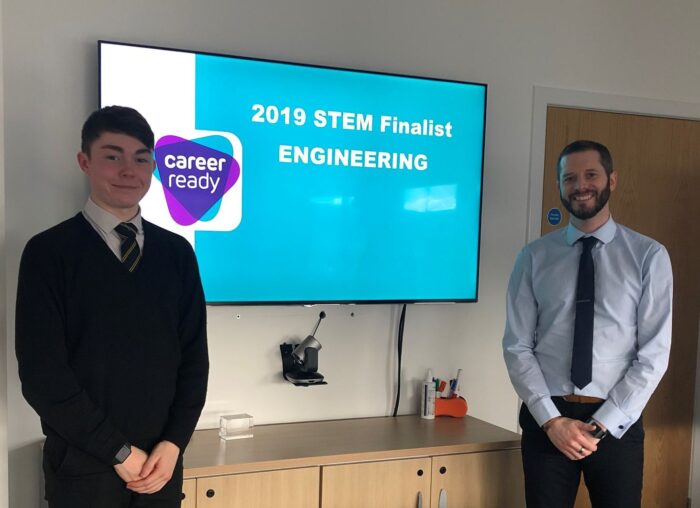 My name is Steven Dunbar and I am a Director of a Company named Clan Partners which is the parent company to a group of specialist Recruitment businesses.

I am a life-long resident of Keith and attended Keith Grammar School. Through no fault of anyone’s I left school with no clear direction and fairly low aspiration and as a result I took the first job I was offered which was in IT for the Moray Council. I enjoyed a successful career in IT but when moving to a new IT role in Aberdeen I found that there were opportunities to switch to a career I could be more passionate about and in which I could test my full potential.

It is the experience of going through that journey that led me to volunteer for Career Ready as I saw it as an opportunity to positively influence someone from my old school and help someone better realise their capability at a younger age.

When I volunteered for Career Ready, I had just missed the September intake so could not be allocated a Mentee until the following year. As a result, I had agreed to take part in delivering a Masterclass to students in the meantime.

The following April I was contacted by Career Ready and asked to take on a Career Ready student named Lee Scott whose mentor unfortunately had been unable to commit the time to the process. I accepted and commenced work with Lee on catching up the previous 6 months and preparing him for the Internship in the June.

Lee was a fantastic student and was happy to commit to the extra sessions required to catch up, despite it coinciding with the exam period. Lee knew he wanted to be an Engineer but didn’t know what type of engineer, what industry or what level of engineer would be right for him. My initial work with Lee was following the Career Ready guidance but quickly we found that Lee was academically excellent and the apprenticeships that he had looked at locally may not have been the correct path for him.

To give Lee clarity, I sought permission to change the internship structure and rather than bring Lee into 1 of our Recruitment businesses I arranged (through my network) to place Lee for 2 weeks each into 2 excellent Engineering businesses which were Clark & Sutherland in Keith and Katoni Engineering in Aberdeen. The result was that through experience Lee found that he wanted to be a process Engineer and is now on a Graduate Apprenticeship with Katoni Engineering full-time. Further to that, Lee was the Moray & UK-wide Career Ready STEM Engineering student of the Year!

In summary, Career Ready was a great way to have an impact on a local student and help to de-mist/de-scare the world of work for a really talented young man. On a personal level it was great coaching practice and generally fulfilling to see my efforts with Lee be reciprocated by his effort.

I would recommend Career Ready mentoring to anyone really.