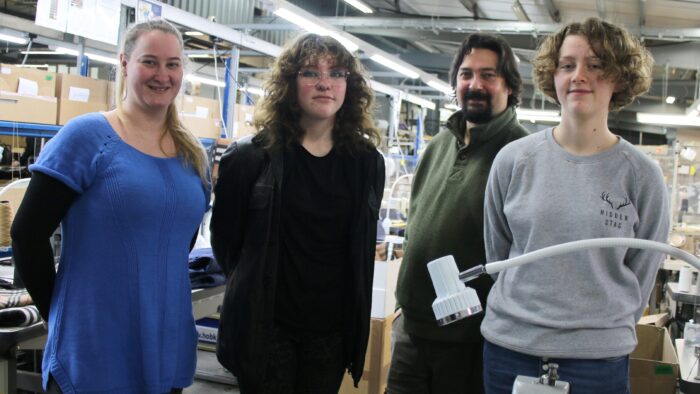 Lexi Sayle and Carrie Brown, both Foundation Apprentices from Elgin Academy, are working on a year-long project through Moray College UHI and luxury textile manufacturers Johnstons of Elgin.

Their innovative 3D printing project aims to solve the challenge of maintaining the company’s traditional Singer sewing machines that are used to produce their premium products.

Out of production for many years, these rare machines produce the traditional blanket stitch that is used on Johnston’s merino and cashmere throws.

The 10 machines are in constant use, with six or seven working on a shift rotation at any one time, which can mean they’re in operation for 20 hours a day.

But spare parts are scarce and there is only a small bank of machine “shells”.

So the two 17-year-old students - who are working towards their Foundation Apprenticeships at Moray College UHI - have been tasked with stripping and rebuilding a machine to suggest potential engineering methods to prolong its life expectancy.

They aim to create a library of 3D printable spare parts, as well as an assembly guide for the old Singer machines.

The students are completing Foundation Apprenticeships in mechanical and electronic engineering, which covers a range of subjects, from the theory of mechanical engineering to practical workshop tasks such as electronic testing.

Carrie said: “Taking the machines apart and constructing components made with 3D printing technology takes a lot of measuring and dedication but it’s really interesting.

“There is more work than at school but it’s different and there are no uniforms. That gives a sense of freedom and I feel more comfortable.

“I have learned lots of new things, not least the time and effort it takes to do a project. I’ve certainly composed far more emails than I thought!”

“By giving young people earlier exposure to the world of work, we’re helping them develop the skills, experience and knowledge they’ll need when they leave school.

“Part of Lexi and Carrie’s apprenticeship involves taking part in an industry challenge project. We are very lucky to have the sewing machine project proposed by Johnstons of Elgin, as it aligns so well with their studies.

“The project will deliver a library of component parts to the engineers at Johnstons, which they can then get commercially printed when they need them, with a secondary goal of producing a complete three-dimensional model of the blanket-stitch machine.

“These are incredibly intricate machines, with complex shapes which represent a significant challenge to take apart, measure and model in three-dimensional computer-aided design (CAD).

“It’s really the drawing in CAD and creating a working 3D model with all the right clearances and tolerances that is the most time-consuming task.

“I have to say Lexi and Carrie are a very effective team. They are motivated and quick to pick things up.

“There’s a lot more to it than just the actual work. They’ve drawn up project plans and Gantt charts to manage their time and there is an element of tracking finances, risk assessments and stakeholder management.

“For them, it’s the chance to get a head start on their careers by gaining an industry-recognised qualification, work on real projects that give them real commercial experience and broaden their career options when they leave school.”

Lexi said: “It’s been a challenging and fun experience and I’ve learned a lot.

“One of these has been how to do a project presentation. It wasn’t something I was very good at before but now, with some coaching, I feel more comfortable with presentations.

“It’s also been really well supported by the college. I’m dyslexic so even little things like them printing work materials off on purple paper have really helped me.”

Johnstons of Elgin has an established history of helping young people into the workforce, running its own apprenticeship schemes on sites in Elgin and Hawick.

However when Developing the Young Workforce Moray made the introduction, they were quick to see the value of taking part in this specific project.

“We are committed to the communities in which we operate. Developing the skills we need will allow us to continue delighting our customers with the most beautiful and innovative textiles for a long time to come.

“Carrie and Lexi’s wholehearted engagement with this project has proven the value of partnerships between education and industry.

“We would love for interactions - such as the Singer sewing machine project - to lead to young people applying for and accepting careers with Johnstons of Elgin, having found out about the exciting variety of opportunities available on their doorstep”.

Stephen Donachie, Johnstons of Elgin’s senior sewing technician, explained that customers love the unique detail of the stitch produced by the Singer machine but that the machine used to create it is dying out.

“A traditional blanket stitch is often used to reinforce the edge of thick materials, and its distinctive aesthetic is visible on both sides of the fabric.

“There’s nothing else on the market that can give us the blanket stitch in this finish,” he said.

“It's a low-speed, low-impact machine, and there's a fair level of operator skill required. We can still use these machines, give them a spot of oil in the morning, and we don't get many problems.

“Except if a part breaks and we can’t get a new one.

“We buy second hand or reconditioned machines, and even if they have been reconditioned, we put them on the bench and strip them down to recondition and rebuild them,” said Stephen, adding that he has explored several options to secure vital spare parts.

“We network with UK suppliers to find part. Some are made in the Far East, but the minimum order is 100, which is about 50 years’ supply.”

As well as preserving these machines for practical use, the process is safeguarding a piece of history. Stephen explained that the machines have unique serial numbers that can trace the date of manufacturing and the quantity produced. Some number in the thousands but with others, only five or six were made.

Lexi and Carrie are two of around 43,000 apprentices in jobs and work-based learning across Scotland. There are more than 12,000 employers involved in Scottish apprenticeships.

Scottish Apprenticeship Week (which is running from 7-11 March this year) shines a light on the vital role apprenticeships play in supporting people, employers and the economy.

It shows that apprenticeships work for Scotland by giving people the skills employers need now and for the future.