Project that is dying to make a difference 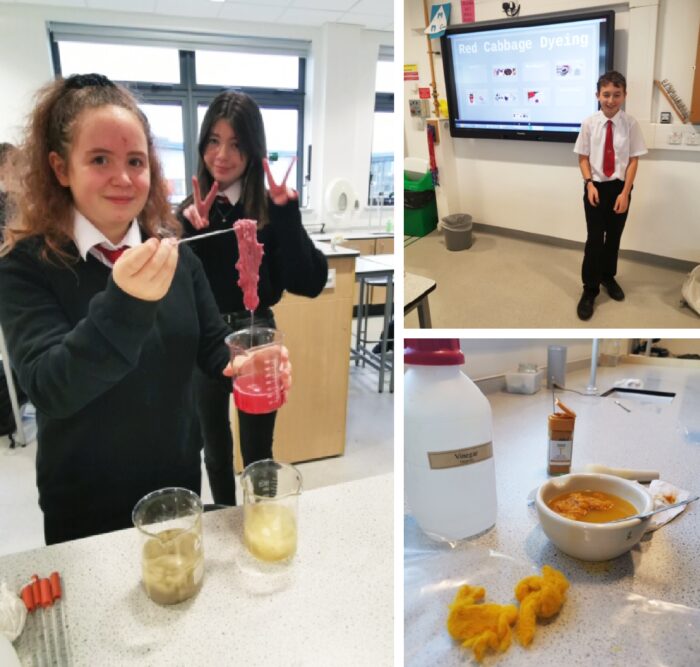 An innovative project that shows how school subjects are used in the world of work highlights how businesses can add value to the curriculum.

Some years ago, chemistry teachers Nichola Burpitt and Mark Baker had been looking for a project to bring their subject to life in the “real world” for their Elgin Academy pupils.

And it’s developed into an ongoing collaboration with Johnstons of Elgin that has evolved to add real value to bringing the workplace to the classroom.

“It was about seven years ago that we were looking for something give pupils real life examples of how chemistry works,” said Mark.

“Initially we approached Johnstons of Elgin to supply wool or fibre for a dye project.

“The idea was that pupils would have to use natural products to create a fixed dye with which they could colour the fibre.”

The project gathered momentum, and soon the Johnstons’ team was visiting the school to speak to the students.

Now the annual project is run across the entire cohort of the S3 year. The 180 pupils spilt into groups of between six and nine pupils to develop their own dyes.

Each class presents its dye ideas and chooses its own winner, that then progresses on to a grand final in the main hall. There is even a trophy and medal presentation to the winners.

“They receive a brief from us, and then they have to put together a budget and set out their research plans. They then present their ideas to me and the dyehouse manager, as if they were pitching for the contract.

“This means they have to cost out materials and time, and present data using applications like PowerPoint. There are a lot of transferrable skills in the entire process.”

Mark said: “The dye has to be completely natural, with no synthetic ingredients – so no hair dyes or food dyes. And we get asked that every year.

“Some of the individual projects have returned some good results. Coffee is popular, and the students always like red, so anything around berries or beetroot. And turmeric is always a surprisingly common choice although I think the wearer might turn their nose up at the smell.

“We’ve had distilled onion leaves and one team peeled and skinned blueberries which gave a nice pink colour. I think the most unusual ingredient I have come across was dragon fruit.

“Sunflower seeds was an unusual choice, and a disappointing one as a full day of boiling offered absolutely no colour at all.

“Equally unsuccessful was charcoal. The pupils have to make a paste that will fix in the wool. Charcoal only makes a suspension so it’s never going to produce a result.

“But it is a useful lesson in how chemistry works nevertheless as the pupils have to think about how the dye will stick to the wool.

“The whole project has involved building a really important link with a local business. Through the process, the students can really appreciate the role that chemistry plays in the world outside the classroom.”